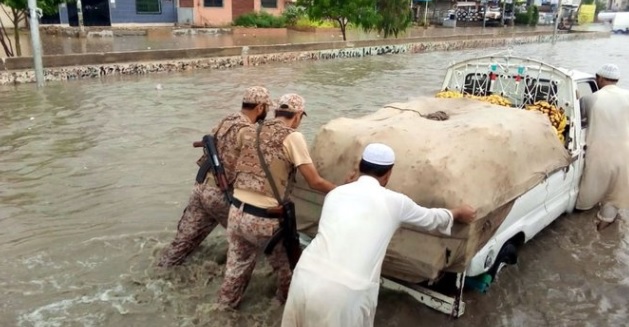 A 30-year-old man was electrocuted to death in Landhi area, Edhi services said. HIs body was shifted to a nearby hospital.

Meanwhile, the Pakistan Navy during its rescue operation recovered the bodies of two persons from Shah Faisal Town and Korangi Crossing areas, which were handed over to their relatives.

According to a statement issued by the navy, it deployed emergency response teams in aid of the civil administration in various areas that were equipped with boats and other life-saving equipment.

According to data released by the Met department, PAF Faisal Base recorded 130 millimetres of rain while Nazimabad has recorded 105.6mm since morning. Mausamiyat received 74.3mm of rain, while Saadi Town recorded 72mm.

About 98.5mm of rain was recorded in PAF Masroor Base, Surjani received 73mm while Kemari recorded 82.5mm.

Many major arteries witnessed severe traffic jams across the city and many areas of Karachi were experiencing power outages.

Some areas of the city have been without power for more than 10 hours now.

Urban flooding led to the closure of the KPT underpass in Clifton as well as the Punjab Colony, Liaquatabad, Nazimabad and Ghareebabad underpasses for traffic, according to the Traffic Police. The situation caused traffic jams on surrounding roads.

According to the Met Office, the city will continue to receive rain until tonight.